My Christmas gift for y'all — The Grow Network Community
Sometimes you win, sometimes you learn.

My Christmas gift for y'all 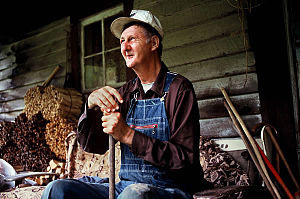 I was very honored to know the Hicks family of Beech Creek, NC when I was younger. The Hicks were true Appalachian mountain people, true homesteaders going back many generations on the mountain. By the time I met them, Ray and Rosie were up in years and had only one son living at home. So, only perhaps 75% of the food they ate was grown on their property or harvested from the woods. However, they still only had one electric light bulb, and no other electricity, an out house, a spring house, a woodstove for heat and a woodstove to cook on. Illnesses were treated with Rosie's herbs and planting was still done by the signs. Income was still gathering ginseng, goldenseal, angelica and other wild herbs. It was a living example of the Foxfire books. I wrote this a few years back - it is a story close to my heart, and is my gift to y'all. I hope it will encourage others to share stories.

For several years, every Christmas Eve, my mother and I would make the long, winding drive up to Big Ray’s house. Big Ray was Ray Hicks – the famous storyteller, recipient of the National Heritage award, subject of several books and a Smithsonian exhibit – the teller of the Jack Tales. To us though, Ray and his family were like our family and going up to Ray’s was as much a part of our Christmas tradition as presents under the tree.

Orville (pronounced Arville) Hicks (a famous story teller in his own right) introduced us to Ray, his wife Rosa (pronounced Rosie) and their son, Ted. Arville was (and continues to be) a close family friend. Over the years, we accompanied Arville to Merlefest and Jonesboro, and through him, met many famous folks, Doc Watson, Ora Watson, Emmylou Harris, Mac Wiseman, Earl Scruggs, Sam Bush, Ricky Skaggs, Marty Stuart, Etta Baker, Roy Bookbinder, Guy Clark, Frank Profit Jr. and so many others, but none meant more to us than Ray and Rosie Hicks and their family.

The first time we met Ray and Rosie was at the Cove Creek School. Ray had a sister who shared my mother’s name. She died early. When Ray met my mother, he repeated her name over and over. From then on, we were like family.

We would drive up from Foscoe, usually in the snow, down what was then miles of unpaved road. We would park on the hill above Ray’s and holler out “hello”. To my many readers whose origin is beyond the Blue Ridge Mountains, let me give you this piece of advice: If you ever visit an old cabin miles down an unpaved mountain road, always holler “hello” before you approach the house; it could save you a few ounces of painful buckshot in your person.

The first to greet us would always be the dogs – Ted’s beagle and Ray’s little black dog that had a mohawk shock of white hair running down the center of his head. Then Ted would yell out, “You’uns come on in.” Ray, who was almost always sitting in a chair before the woodstove, poking a stick into the fire would reply to our greeting of “Merry Christmas”, “Gaw, is it Chirstmas, gaw… it snuck up on me this year.”

I guess that statement needs a paragraph of explanation. Ray and his family lived in a cabin built by Ray’s father. Their only electricity was one light. There was an outhouse outback. Rosie cooked on a wood burning stove/oven. Ray had no way of knowing the date, nor any reason to keep up with such things. Ray’s way of life was timeless – as old as the mountain. Time was marked by plowing, planting, growing, harvest, hunting, winter, spring, summer and fall.

Rosie would rush into the sitting room/bedroom and hug my mother. We would visit for a while, and then Rosie and my mother would disappear into the kitchen to talk. We learned volumes of herbal remedies from Rosie, whose hair grew long and black well into old age due to her partial Cherokee heritage. Her aunt was a famous “witch woman” to whom local folks went for cures and to have their fortunes told.

Rosie didn’t approve of drinking as a rule, but she didn’t mind on Christmas. We would bring eggnog and brandy. Rosie and my mother would emerge from the kitchen with glasses of brandied eggnog. Soon, the celebration would be in full swing. I’d either bring my guitar or play a 6 string banjo (tuned like a guitar) that belonged to Ted. Arville was usually there, and he would join me on guitar or banjo. Ray would play his harmonica.

We would play all of our favorites – songs by the Carter Family, Jimmy Rogers, Bob Wills, Roy Acuff, Hank Williams and Bill Monroe. Ray’s favorite songs were the mournful “Precious Jewel” by Roy Acuff and good old “John Henry”. I knew four or five versions of John Henry, so I would play them all as Ray sang and played harmonica in his absolutely devoid of rhythm style – if you could accompany Ray, playing with Willie Nelson would be a piece of cake! Rosie would sing the old mountain ballads, in the old shape note style – all those beautiful songs about murder, dying lovers, etc.

We would also sing a few hymns, which was always risky. Ray had a unique understanding of the Christian doctrine and theology. As Arville put it, “A preacher came up here once and he and Ray got into it over the Bible. Ray ran that preacher off, and you never seen a preacher cuss so much!”

Hours would pass but time would stand still. We would exchange gifts, which always included Ray’s favorite old fashioned candy and a pouch of tobacco. Ray rolled his own cigarettes, and they were the worst looking cigarettes you’ve ever seen. Burning bits of tobacco would fall everywhere as he smoked and told unending variations on stories like “Wicked John and the Devil”. Arville would tell a story, punctuating it with his deep chuckle. Then would come my turn and I’d do my best in my own awkward manner. Ray would always cheer me on afterward, encouraging me to take up the tradition, “Gaw, that was pretty good! You could almost pass for a Hicks as tall as you are. There are two kinds of Hicks, the crane neck Hicks and the Bull neck Hicks. Arville’s a bullneck! Gaw” I stand 6’4”, and even in his late 70s, Ray was a good three or four inched taller than me!

Ray and Rosie would both invite us to stay the night and would get a little choked up when it was time for us to leave. Ted would walk us up to our car. It was always so cold up on Beech Mountain on Christmas Eve. The wind would blow the snow around. But, usually, the sky was clear and the moon would reflect on the snow so brightly that it was never really dark. You could see city lights in Tennessee in the distance. The silence and cold was such a contrast to the warmth and celebration inside the house. I’ve never experienced anything else like it and I doubt I ever will.

Ray passed away a few years ago. We went to the funeral in Boone. Ted and his older brother Leonard met us at the funeral home. “I knew you would come,” Ted said. “You’uns are just like family,” Leonard told us. My mother went to talk with Rosie. I sat with Ted and Leonard, reminiscing. I’ve always had a knack for mimicry, often imitating people’ voices without being aware of it. “Daddy would have appreciated you’uns coming,” Leonard said. I know just what he’d say, I replied, “Gaw, it’s Beeeecky and her boy, gaw!” Ted and Leonard both laughed and remarked how I sounded just like him. We all got choked up about then and stepped outside. “I never did like crowds of people; I guess I’m just used to being up on the mountain.” Ted explained.

Someone’s rooster had gotten loose and was strutting around the parking lot of the funeral home – an odd sight in the center of bustling Boone. At Ray Hick’s funeral though, it didn’t seem at all out of place. The New York Times and National Public Radio ran obituaries on Ray; somehow though, that colorful, strutting, crowing rooster seemed a more appropriate tribute. We talked about the rooster until our throats loosened.

This Christmas Eve, I’ll remember those nights at Ray’s; I reckon I always will. If y’all have children or grandchildren, here is a gift idea for this Christmas: buy them a recording of Ray or Arville Hicks telling stories, or buy a copy of The Jack Tales, collected by Richard Chase, and learn to tell the stories. There will never be another Ray Hicks, but the Jack Tale tradition can live on through generations to come.