Container Greens - An Indicator — The Grow Network Community
A superior man is modest in his speech, but exceeds in his actions. 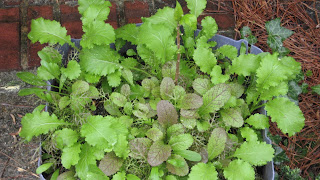 The first thing I had to figure out in this alien environment was what would grow and when to plant. Greens usually grow well in sandy soil and partial shade, and they tolerate cold snaps. So, I decided to test out a container of mustards, with the idea that once they started growing vigorously it would signal a good time to plant other greens.

I found an old, cracked storage tote, drilled some holes in the bottom and filled it about half way with potting soil. A seed seller I've bought from before, on Ebay, offered a packet of mixed greens - mostly mustard and a few Japanese greens (the names of which I've forgotten) for .99 cents with free shipping, and I had some older heirloom curly mustard seeds left over.... with only a dollar at risk (knowing I could re-use the potting soil if it didn't work), what did I have to lose?

When I planted the seeds, it was still winter. As expected, the mustard sprouted quickly. I chose a spot by the front porch, where I could observe daily and that had about average sunlight for the yard. The tiny plants grew maybe an inch tall, with just their dichotomous/seed leaves, and stopped. I just left them alone with no care. Around the last week of February, they began growing.. increasing vigor as the temps warmed and Spring neared. Greens grow very slowly below 50 degrees, but it is the length of the days... the hours of sunlight, that really make the difference. 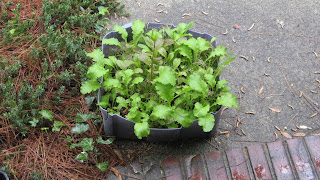 As you can see, now I have a nice bin packed full of greens! I suppose I'll let them grow until April 1, then begin harvesting a few of the larger leaves off of each plant every few days. It may not seem like much, but this container harvested "cut and come again" style as opposed to harvesting the entire plant at once, will provide around four servings of greens per week until the temps get too hot. At that point, they will provide abundant seeds both for planting in the Fall and for making prepared mustard (my favorite condiment). Be sure to look for that recipe here. I love hot, strong mustard!

Beyond the food value though, this little container of greens told me when to plant and that the shade would be no problem. The first week of March, I began spading up the garden and planting greens - 11 varieties on the first day.... more on that once the (now tiny) plants grow large enough to photo and tell apart. 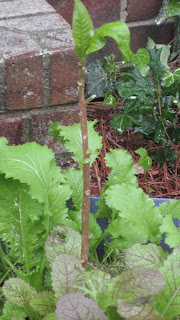 One other thing though is that odd looking stalk in the center of the container. That, was a gift from the birds - poke. The poke began to grow a full two months before I could find any in the wild.... and I began harvesting a leaf or two every few days as soon as it had more than two leaves. Poke is traditionally eaten as a wild, Spring green in the South…. even though it is poisonous. Yes, poisonous. I am not recommending that any of my readers eat it, but I LOVE it! We harvest the leaves when they are young and tender, when they are green. The belief is that as the leaves age and the purple color of the stalk becomes present in the leaves, they become more toxic. The root and berries contain the most poison, but are used in herbal medicine. Even when entirely green, most folks recommend boiling "a mess of poke salat greens" in 3 changes of water, draining thoroughly and then cooking with pork seasoning and salt. Honestly, I don't do all that unless the leaves are fairly mature. I generally just pick a few young leaves and eat them raw, out of hand. I won't recommend anyone else do that though. 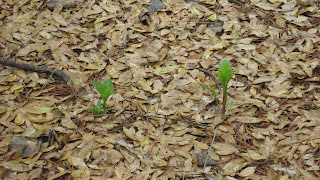 Here is some poke growing wild in a corner of the yard - they just came up last week... free food!!! I've also been eating forsythia and redbud blossoms, cedar/juniper "berries" and an occasional Japanese maple leave and a few their wild edibles, just to get a taste of Spring. The old mountain folks used to say such "Spring Tonics cleanse the blood". Maybe they do. I just like fresh, unique flavors.