Hydrogen Peroxide In The Garden — The Grow Network Community
Flowers are the music of the ground from earth's lips spoken without sound.

Hydrogen Peroxide In The Garden 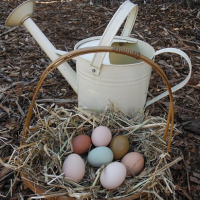 Until recently I'd not thought of Hydrogen Peroxide in any capacity other than cleaning. That was until I read an article in an organic magazine where it was mentioned in passing.

Upon doing a little bit of research it appears to have a range of benefits.

The first way it can help in the garden [so I am told] is to kill fungi and bacteria in the soil that causes root rot.

Due to the additional oxygen levels it's said to help the plants to take in oxygen through the roots, as well as other nutrients.

The recommended amount for such applications was to use a 3% Hydrogen Peroxide solution with 1part Hydrogen Peroxide to 1 part water. This level will burn the leaves however so it was said to be very important to ensure it ONLY got onto the soil and not the foliage.

Another option is to put 1teaspoon into 1 cup of water and spritz it onto the foliage. This is said to protect the plants from ants and bugs. This is the application that was briefly alluded to in the article I read.

It is said that the application of Hydrogen Peroxide and water will produce stronger plant growth as a byproduct of the increased oxygen intake of the plant.

Lastly, a suggested option was to help in the aid of strong germination and growth of seedlings when the diluted 1:1 mix was used from time to time.

All this sounds great, but I've never used it in my garden before so I cannot confirm any of it.

I was however researching the options as I had one section of my winter veggies that weren't doing so well. So now I am experimenting.

With one bed I am going to continue to water with only adding the extra water that I'm soaking some seaweed in from a trip to the beach a little while back.

To the other bed I am going to continue watering with the diluted seaweed solution as well as giving it a water with the Hydrogen Peroxide 1:1 every so often.

It will be interesting to see how they perform.

The next thing is to ask if anyone on TGN has used Hydrogen Peroxide in their gardens, and if so, what applications was it used for, and what were the results?