So Proud of my Rooster — The Grow Network Community
If you are raising heritage poultry, The Livestock Conservancy is doing a census and requests your help.
Click Here to enter the census!

So Proud of my Rooster 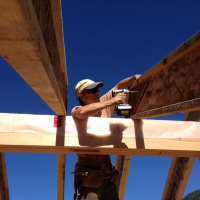 We named him the magnificent Mr. Fitzwilliam Darcy and his girls are the Bennet sisters. (If you have read Pride and Prejudice, you will know who these characters are.)

He is brilliant, a barred rock with lovely red wattle and crown. And he is particularly gentlemanly - in a roguish way - and in other ways too. Letting the sisters eat the best of the food, accommodating a secondary rooster with grace, always right there when a hen is disturbed, making sure they all get into the coop at night. And except for a few minor misunderstandings between us, Mr Darcy and I have a pretty good relationship.

Well! Two days ago, i was doing some chores near the chicken area and Mr Darcy began an extremely LOUD alarm. I looked up and saw - hawks - three of them circling above. The girls dashed for cover, wherever they were - some into the greenhouse, some into the coop, others under the boughs of pine trees.

Mr Darcy kept it up for a very long time. He was so adamant that those hens keep safe. They stayed close for almost two hours before they once again began their tilling.

I was So amazed at the hold he had on them. That they knew instinctively to listen to him and what to do. And, except for the fear that I knew they all experienced, I felt I witnessed a beautiful side to things that doesn't happen every day. Very proud of them all.