A Brief History of Medicinal Bitters

A Brief History of Medicinal Bitters

Bitters are one of the most ancient medicines know to man. According to an article that ran in "Science News Journal" in 2009, "Jars suggest early Egyptians mixed medicinal plants into alcoholic beverage."  https://www.sciencenews.org/article/ancient-remedy-bitter-herbs-and-sweet-wine The article documents archeological evidence that the herbs were mixed with wine, likely for medicinal purposes. Although not mentioned as being combined with alcohol (except for a symbolic reference to Wormwood, and the mixture of Myrrh and gall in wine given to those who were about to be crucified, as a sedative) bitter herbs are mentioned prominently in the Bible, such as in the Passover Feast. It may be assumed that the digestive benefits of bitter herbs were recognized, beyond their symbolic value.

That leads us to Theriac. Many herbalists and historians point to Theriac as the first documented use of medicinal bitters in European literature... bitters have centuries old use in Chinese medicine, but that is a topic I'll save for another day.  However, Theriac bears little resemblance to Digestive Bitters. Theriac was intended to be a universal defense against poisoning.

According to legends, the history of theriac begins with the king Mithridates VI of Pontus who experimented with poisons and antidotes on his prisoners. His numerous toxicity experiments eventually led him to declare that he had discovered an antidote for every venomous reptile and poisonous substance. He mixed all the effective antidotes into a single one, mithridatium or mithridate. Mithridate contained opium, myrrh, saffron, ginger, cinnamon and castor, along with some forty other ingredients. When the Romans defeated him, his medical notes fell into their hands and Roman medici began to use them. Emperor Nero's physician Andromachus improved upon mithridatum by bringing the total number of ingredients to sixty-four, including viper's flesh, a mashed decoction of which, first roasted then well aged, proved the most constant ingredient. Lise Manniche, however, links the origins of theriac to the ancient Egyptian kyphi recipe, which was also used medicinally.

Greek physician Galen devoted a whole book Theriaké to theriac. One of his patients, Roman emperor Marcus Aurelius, took it on a regular basis.

In 667, ambassadors from Rûm presented the Emperor Gaozong of the Tang Dynasty in China with a theriac. The Chinese observed that it contained the gall of swine, was dark red in colour and the foreigners seemed to respect it greatly. The Tang pharmacologist Su Kung noted that it had proved its usefulness against "the hundred ailments." Whether this panacea contained the traditional ingredients such as opium, myrrh and hemp, is not known.  https://en.wikipedia.org/wiki/Theriac

Although Theriac contained bitter herbs, such as Gentian, it seems that the bitters as we know them came into medicinal use by ancient Greek and Roman physicians via Gentius. As I explained last week, in a post on Gentian, According to tradition, Gentian was named for Gentius, ruler of the Illyrian Kingdom (181-168 BC). "Dioscorides (the Greek physician) believed that the king Gentius identified the properties of this plant and used the plant root in 167 BC by the incidence of Plague."

Regardless, by the Middle Ages, Medicinal (Tonic or Digestive) Bitters were in common use by the medical practitioners of the day. The use and documentation of medicinal herbs was especially important to the Benedictine Order. These Catholic monks and nuns did much to preserve and advance the study of horticulture, botany and medicine. They maintained large herb gardens, apothocaries and hospitals for treating the sick.

As can be seen, after Rome fell, the Benedictines quickly became the monastic masters of herbalism, already being focused on the mission of preserving knowledge. Among other things, they perfected the making of tinctures—suspending the essence of an herb in an alcohol base for medicinal and other purposes. Holy Roman Emperor Charlemagne (742-814 A.D.) so admired the Benedictine gardens and techniques that he ordered all monasteries throughout the empire to plant “physic gardens” to supply the monasteries and the empire with healing herbs. https://traditium.org/2017/11/04/monastic-herbalism-part-one/ 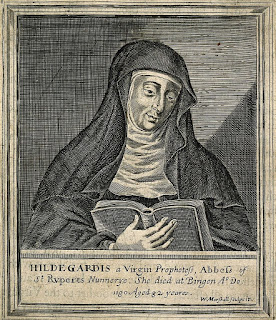 Perhaps most prominent among the medicinally inclined Benedictines was Saint Hildegard of Bingen. Born in 1098, Saint Hildegard was a mystic/visionary from childhood. She became an abbess, a horticulturalist, an herbalist and physician, teacher, artist, author, philosopher, musician and composer of a very large volume of Church music. She is considered to be the founder of Scientific Natural History in Germany. Her talents and works are immense and deep... far too much to get into here. She was a great proponent of digestive bitters and introduced the use of hops in beer both as a bittering agent and a preservative. https://www.healthyhildegard.com/bitter-herbs-for-appetite-control-and-digestion/ 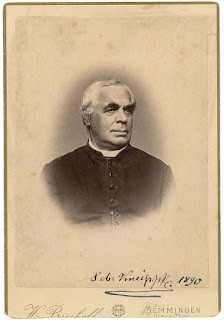 We see Saint Hildegard's influence in Fr. Kneipp.  Born in 1821 in Bavaria, this German priest is best remembered for his "Kneipp Water Cure".  His cures included a number of herbal baths, soaks and steams, various dietary and lifestyle practices... and yes, herbal formulas that included medicinal bitters.   His Kneipp Cure includes Aloe (as a bitter herb), Gentian, Buckthorn, Bog Bean, Chamomile, Anise, Camphor, Centaury, Cloves, Nettles, Fennel, Fenugreek, Grains of Paradise, Juniper, Mint, Chicory, Valerian, Angelica, Wormwood, as well as several other bitter herbs.  He prescribes combinations these Bitters both as tinctures and teas as part of his treatment for a variety  of disorders and diseases.  https://archive.org/details/39002086176469.med.yale.edu

The Swedish Bitters name, at first seems likely that the ingredients come from the country of Sweden (Swedish), but this is not the case. The name derives from the Swedish physicians Dr. Claus (Klaus) Samst. The elixir is said to be the creation of Swiss physician, Dr. Phillipus Paracelsus, who practiced in the 1500s. However, it wasn’t until the 18th century that it was formally labelled Swedish Bitters by Swedish physicians – Dr. Claus (Klaus) Samst.

The mixture with the different medicinal herbs was already long known in the family of the Swedish health-care professionals, but forgotten. The physicians, Dr. Claus (Klaus) and Dr. Urban Samst Hjärn found this in the 18 Century, returned and helped many people with different problems and illnesses.

It is believed that the formulation of a similar drug also belongs to the physician Philippus Theophrastus Bombast von Hohenheim Aureolus (short: Paracelsus), who lived in the 16th Century and suffered much of a criticism from pharmacists and doctors, despite his successes in Herbalism, it was considered as an alternative to traditional medicine.

Dr. Samst died at the age of 104 years in a riding accident. It is said that his ancestors lived a long life and have reached a biblical age.