Oregon Grape Root/Mahonia aquifolium — The Grow Network Community
We may have our differences, but nothing’s more important than family.

One of the great benefits of using medicinal herbal bitters is that they are liver supportive. One of the primary herbs to stimulate liver deficiency is Oregon Grape. The family to which Oregon Grape belongs is Berberidaceae, or Barberry. The Barberry family has a long history of use in herbal medicine and Bitters. I'm going to focus on the Oregon Grape for this post, since it is the one I see most often. As the name would indicate, the species originates in America's Pacific northwest, but as a popular ornamental and hedge plant, it has become widespread through much of North America and I am told it is popular in England and maritime Europe, as well. In some areas it is considered and "invasive exotic" species and wildcrafting would be encouraged where that is the case. In parts of its native habitat, it is considered to be under pressure from development, so growing your own or sourcing it elsewhere may be prudent, depending on where you live. Around here, it grows most everywhere. 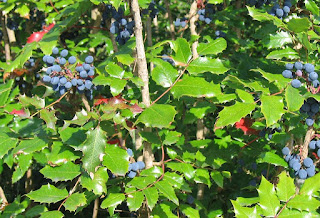 By The original uploader was Meggar at English Wikipedia. - Transferred from en.wikipedia to Commons., CC BY-SA 3.0, https://commons.wikimedia.org/w/index.php?curid=1375500

Rodale's Illustrated Encyclopedia of Herbs mentions that, "in ancient Egypt, a barberry syrup mixed with fennel seed was taken to prevent the plague. In Europe, during the Middle Ages, medicines made from barberry were prescribed as antiseptics, purgatives and tonics. In North America, Indians prepared decoctions from the root and the bark and drank them to restore the body from general debility and to improve appetite."

Barberry's use in Traditional Chinese Medicine (TCM) is described as:

In TCM terms barberry regulates qi and clears heat from several organs including the lung, liver, and gallbladder. It can also be used for several damp heat conditions including dysentery, jaundice, and eczema, but it is not specifically indicated for dampness. There are about 500 species, and Berberis vulgaris is the best known medicinally. In TCM only the dry crust from the roots and stem is used for medicinal purposes, but other cultures also used the berries as medicine. The active subtances of Barberry have the following properties: hemostatic, diuretic, vasodilator, hypertensive, antibacterial (kills bacteria and parasites), and anti-inflammatory.  http://chinesenutrition.org/view_image.asp?pid=626

The fruit is edible and very nutritious, being high in vitamin C. They are, however, extremely sour. Most people combine them with sugar to make jams or jellies. The late herbalist, Michael Moore, describes the flavor of Oregon Grape berries, in particular as, "sucking simultaneously on a Vitamin C tablet and aspirin."

In his teaching through the Southwest School of Botanical Medicine, Moore often used Oregon Grape as and example of his view of herbal energetics. Oregon grape root, he explained, is not nutritive to the liver. It is not a food or a vitamin. Instead, it acts as a perceived irritant. He said the role of Oregon Grape is to "poke the liver", stimulating it to function. The then more active liver is better able to cleanse the blood, regenerate liver tissue and support the similar tissues of the skin and small intestine. The role of the liver in skin health is why medicinal Bitters, especially containing Berberine, is a "go to" for herbalists in cases of psoriasis and eczema.