Does anyone forage for and use Russian (Autumn) Olive

Delicious, healthful, and (sometimes a little too) bountiful

Early fall, the moment when autumn olive bushes begin developing buxom clusters of ruby silver-glittered berries, my yearning to taste their irresistible flavor overtakes my good sense. A small handful of immature berries turn my mouth into a desert. Their astringency nearly shuts down my ability to eat more; but certainly not my desire!

My lust for the celestial flavor of mature Elaeagnus umbellata berries has driven me to gobble down one too many unripe promises until my throat nearly closed up. A little patience, however, and the autumn olive harvest arrives as a timely, gracious gift––the most abundant, ambrosial, nutritious berry this corner of the globe now has to offer. They ripen to perfection right as we mourn the loss of our tender, frost-killed garden crops and start to shudder from the deeply chilling snaps of late fall. Autumn olives, also called autumn berries or silverberries, are the sweet companion to the bitter pill of autumnal death.

A single autumn olive shrub (also known as autumnberry), in a good year, can drip with up to 80 pounds of toothsome fruit, which warrants “superfood” status. The berries have up to 17 times the lycopene levels of tomatoes––a nutrient noted for protecting against cervical, prostate, and colon cancers. The berries also boast high levels of vitamins A, C, and E, and a diverse array of other potent antioxidants. Autumn olive is easy to identify, pleasurable to eat, a nutritional powerhouse, freely available, and abundant––how could we ask for more?

Well, we did ask for more and this wish yielded results loaded with new challenges. Hailing from eastern Asia, autumn olive was introduced to the U.S. in the 1830s, originally promoted as an ornamental shrub. Our love affair with autumn olive grew as her ecological charms were realized, we thrilled at her supreme ability to thrive in dry, saline, infertile soils; fix nitrogen, feed wildlife, prevent erosion, and withstand drought. Enchanted by the potential of autumn olives to return life to forgotten wastelands, the U.S. Soil Conservation Service arranged extensive plantings along highways and strip mines in the 1950s and 60s. She performed so well at this challenge, her dense colonies are now deemed a threat to biodiversity in some areas and appear on many invasive species lists. Birds in celebratory duty deposit her seeds, perfectly packaged in fertilizer, over vast territory. Autumn olive’s sheer fecundity, and ease at getting along in harsh conditions, has transformed its image from poster child of land renewal to invasive nuisance.

Employing any of the myriad culinary applications––steak sauce, salsa, jam, catsup, and chutney, to name a few––offers a much more elegant approach to berry bounty than the shortsighted response of spraying Roundup on such a lavish banquet. After all, do we want to support Monsanto, or gastronomic creativity? Autumn olives boldly elevate the nutritional profile of condiments and dishes while lending a sublimely full-bodied pomegranate-tomato flavor.

Savory sauces that involve long, slow cooking techniques concentrate the brightness of the berries while intensifying the bioavailability of lycopene. Catsup made from wild-harvested autumn olives becomes a sophisticated, healthful addition to a meal. Make your own autumn olive catsup and invite more dietary diversity and nuanced flavor to your dinner table.

Are these shrubs a threat asking for a chemical blasting or a wellspring of resilience and nutrition, a testimony to the triumph of abundance over barrenness? A bit of wisdom from a Haitian proverb: “We see from where we stand.” When I am lost in a thick grove of autumn olives, with buckets of berries, the birds indulging in the feast and finding refuge alongside me––this patch of “invasive species” looks more like a sanctuary of food and habitat than a malignant menace. 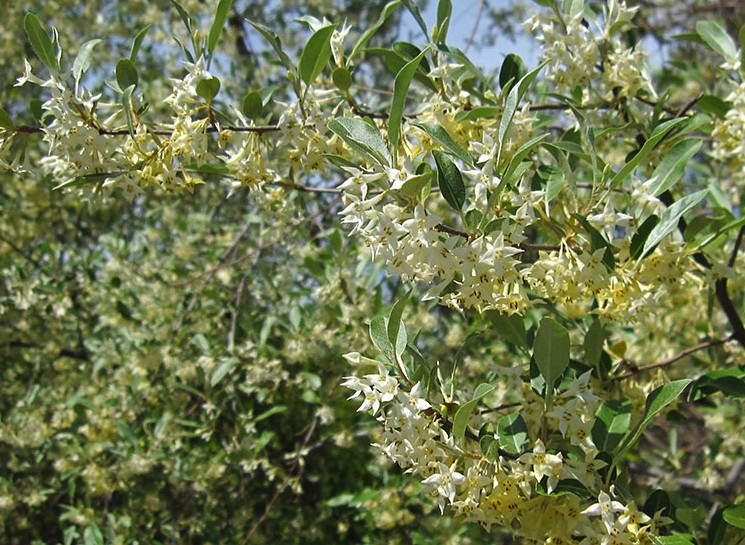 Autumn olives have distinctive silver sprayed leaves distinguishable at high speeds cruising down highways. After you get officially introduced, there is no turning back—you’ll find them everywhere. Harvest autumn olives after the first hard killing frost. They appear in September and can linger on the shrubs through November. Birds wait patiently until they perfectly ripen; take a cue from them to find the best bushes. Taste each bush; each is different, with a range of berry colors and flavor. They can be eaten raw or cooked in sauces. 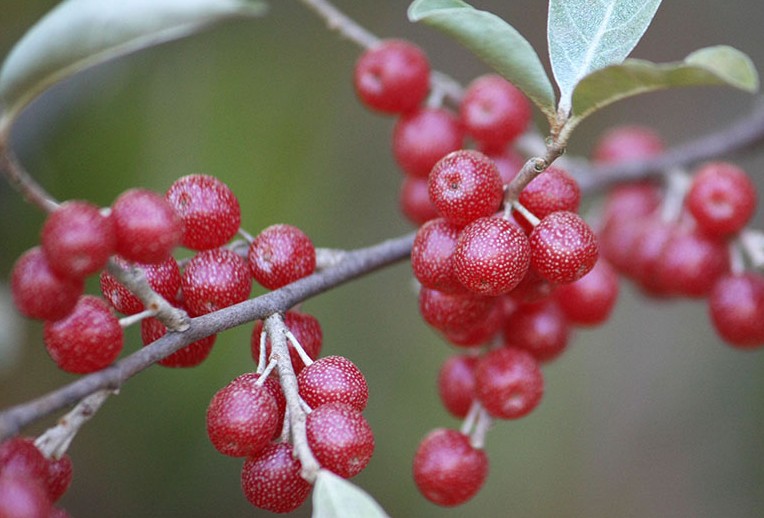 Not sure I'm ready to make ketchup but we have tons of these, I will be looking at these in a different way from now on.