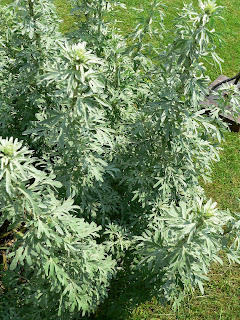 Among the most storied bitter herbs is certainly Wormwood, Artemisia absinthium. It is Wormwood, that was so synonymous with bitterness that it was used symbolically in the Book of Revelation, "The third angel blew his trumpet, and a great star fell from heaven, blazing like a torch, and it fell on a third of the rivers and on the springs of water. The name of the star is Wormwood. A third of the waters became wormwood, and many died from the water, because it was made bitter." Wormwood, having the ability to turn water bitter and to kill intestinal worms, was perhaps a more obvious symbol to our ancestors, who knew it as a common medicinal herb. While the several instances in which Wormwood is mentioned in the Bible use it as a symbol of suffering, punishment and purgation, there is also one reference which indicates that it may have been known as an intoxicant in the ancient world, "He hath filled me with bitterness, he hath made me drunken with wormwood." (Lam 3:15).

Wormwood though, is certainly not too bitter to be enjoyed. In modern times, Wormwood is much less used as an ingredient in drinks or Bitters, owing in great part to the stigma it gained as a popular beverage. Wormwood is the essential herb in Absinthe. This was the drink favored by artists and writers in the 1800s. It was generally a highly alcoholic cordial, combining wormwood with sweet, licorice flavors, a brilliant green in color. The addition of a bit of water to the glass would cause "a chemical reaction that releases flavor and changes the color; this reaction is known as the louche.." or the arrival of "the Green Fairy", according to Amy Stewart, writing in her book, The Drunken Botanist. Unfortunately, thanks to artists like Vincent van Gogh... and most especially Edvard Munch (whose work is featured below) Absinthe gained a reputation for causing hallucinations and hysteria. 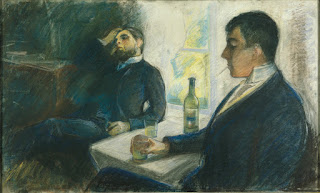 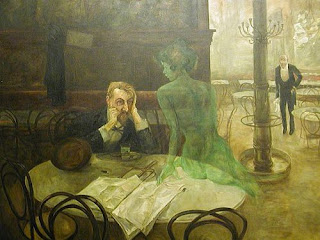 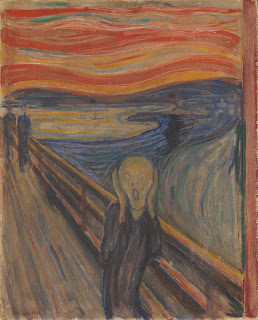 The Absinthe controversy became the "Refer Madness" of its day, provoking what Stephen Harrod Bruhner, in his book, Sacred and Healing Herbal Beers, likened this to a European version of the Protest Temperance Movement, also stating, " There is little actual evidence that Wormwood, even used to excess, will produce the kind of toxic effects that caused the banning of Absinthe, however there is plenty of evidence that it is mildly narcotic and psychotropic." Amy Stewart notes, "Rumors of Wormwood's dangers are greatly exaggerated; while it does contain Thujone that could cause seizures or death at very high doses, the actual amount of Thujone that remains in Absinthe and liquors is actually quite limited." So far, my research shows that the only documented evidence of harm from Wormwood based Thujone comes from the essential oil, and not in using the herb itself. Moreover, it seems that at approximately 145 proof, the extremely high alcohol content of Absinthe may have been the cause of much of its effects.... especially among those like van Gogh, who was noted to even drink turpentine.

In truth, Wormwood is one of the world's most ancient medicinal herbs. It is mentioned in the Egyptian Ebers Papyrus from 1500 BC. The ancient Greeks named the herb after the goddess, Diana, Artemis - Artemisias.  It is mentioned by Pliny the Elder, recommended by Hippocrates and Dioscorides.  Galen wrote that it "propels biliary humours of the belly downwards. It also evacuates via urine, especially if heat is in the veins, although he cautions that because the astringency overcomes the bitterness, wormwood will not serve for phlegm which is in the stomach nor in the lungs."

Mrs. Grieve, in her modern Herbal includes the following verse:

The Common Wormwood held a high reputation in medicine among the Ancients. Tusser (1577), in July's Husbandry, says:

'While Wormwood hath seed get a handful or twaine

To save against March, to make flea to refraine:

Where chamber is sweeped and Wormwood is strowne,

What saver is better (if physick be true)

For places infected than Wormwood and Rue?

It is a comfort for hart and the braine

And therefore to have it it is not in vaine.'

Wormwood is a very bitter plant with a long history of use as a medicinal herb. It is valued especially for its tonic effect on the liver, gallbladder and digestive system, and for its vermicidal activity. It is an extremely useful medicine for those with weak and under-active digestion. It increases stomach acid and bile production, improving digestion and the absorption of nutrients. It also eases wind and bloating and, if taken regularly, helps the body return to full vitality after a prolonged illness. The leaves and flowering shoots are anthelmintic, anti-inflammatory, antiseptic, antispasmodic, antitumor, carminative, cholagogue, emmenagogue, febrifuge, hypnotic, stimulant, stomachic, tonic and vermifuge. The plant is harvested as it is coming into flower and then dried for later use. Use with caution, the plant should be taken internally in small doses for short-term treatment only, preferably under the supervision of a qualified practitioner. It should not be prescribed for children or pregnant women. See also the notes above on toxicity. The extremely bitter leaves are chewed to stimulate the appetite. The bitter taste on the tongue sets off a reflex action, stimulating stomach and other digestive secretions. The leaves have been used with some success in the treatment of anorexia nervosa. The plant is applied externally to bruises and bites. A warm compress has been used to ease sprains and strained muscles. A homeopathic remedy is made from the leaves. It is used to stimulate bile and gastric juice production and to treat disorders of the liver and gall bladder.  http://www.naturalmedicinalherbs.net/herbs/a/artemisia-absinthum=wormwood.php

During the Middle Ages, Wormwood was commonly used in beers as a substitute (and precursor) to hops and in medicinal wines. From this use came the famous Vermouth wine, said to have been invented by Hippocrates in ancient Greece, but used commonly in the monastic medicine of Italy and Germany.

The name "vermouth" is the French pronunciation of the German word Wermut for wormwood that has been used as an ingredient in the drink over its history. Fortified wines containing wormwood as a principal ingredient existed in Germany around the 16th century. At about this time an Italian merchant named D'Alessio began producing a similar product in Piedmont as a "wormwood wine". D'Alessio's version of the libation contained other botanical ingredients in addition to wormwood.  https://en.wikipedia.org/wiki/Vermouth

Given that the branding of Vermouth had not occurred when Saint Hildegard of Bingen wrote, over 800 years ago, in treatment of arthritis, "Squeeze vermouth and take four part of this juice"...I was a bit confused and, how would one squeeze wine, anyway? Then, I realized that this translation by Dr. Wighard Strehlow and Gottfried Hertzka, MD, was likely the result of Latin being translated into German and then German into English. Of course, "vermouth" was Wormwood, and "squeezing", extracting. Saint Hildegard was recommending a Wormwood tincture for the treatment of multiple illnesses and ailments, not a martini!

Well, I hope I have been able to clear up some of the mystery surrounding this Bitter herb. It is an herb one should use with caution. NaturalMedicinalHerbs.net cautions, "The plant is poisonous if used in large quantities. Even small quantities have been known to cause nervous disorders, convulsions, insomnia etc. Just the scent of the plant has been known to cause headaches and nervousness in some people. The plant contains thujone. In small quantities this acts as a brain stimulant but is toxic in excess." But, it is by no means a scary or unusable herb or ingredient in a tonic Bitter. Stephen Bruhner notes, in Sacred and Healing Herbal Beers, that it is an effective treatment against malaria that is becoming resistant to modern pharmaceuticals. Wormwood is also known to cause a clarity of mind and a sense of calm. I think it well worth bearing in mind that to demonize a plant due to its misuse is to reject its inherent worth... and, perhaps even an insult to its Creator.