Gentian, the King of Bitter Herbs — The Grow Network Community
We are franker towards others than towards ourselves.

Gentian, the King of Bitter Herbs

Gentian, the King of Bitter Herbs 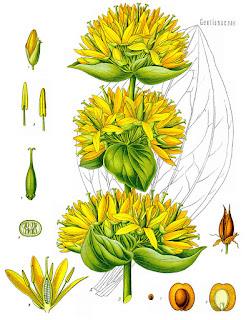 Perhaps the most common bitter herb used in aromatic Bitters is Gentian, but the medicinal value of gentian should not be overlooked. Pictured above is the Yellow Gentian, Gentiana Lutea, commonly used in herbal medicine.

According to NatrualMedicinalHerbs.net, "Gentian root has a long history of use as a herbal bitter in the treatment of digestive disorders and is an ingredient of many proprietary medicines. It contains some of the most bitter compounds known and is used as a scientific basis for measuring bitterness. It is especially useful in states of exhaustion from chronic disease and in all cases of debility, weakness of the digestive system and lack of appetite. It is one of the best strengtheners of the human system, stimulating the liver, gall bladder and digestive system, and is an excellent tonic to combine with a purgative in order to prevent its debilitating effects. The root is anthelmintic, anti-inflammatory, antiseptic, bitter tonic, cholagogue, emmenagogue, febrifuge, refrigerant and stomachic. It is taken internally in the treatment of liver complaints, indigestion, gastric infections and anorexia. It should not be prescribed for patients with gastric or duodenal ulcers. The root, which can be as thick as a person's arm and has few branches, is harvested in the autumn and dried for later use. It is quite likely that the roots of plants that have not flowered are the richest in medicinal properties."

Yellow Gentian is native to the mountains of central and southern Europe, and is endangered, so familiarity with the other members of the family and growing your own would be advised. The aforementioned lists several Gentians. Some have unique documented properties, so be sure to look up each in your favorite herbal:

According to tradition, Gentian was named for Gentius, ruler of the Illyrian Kingdom (181-168 BC). "Dioscorides (the Greek physician) believed that the king Gentius identified the properties of this plant and used the plant root in 167 BC by the incidence of Plague." (https://www.ncbi.nlm.nih.gov/pmc/articles/PMC5634738/

Saint Hildegard of Bingen recommended Gentian for all, “who has fever in the stomach, often drinks powdered gentian in warm wine and his stomach is cleansed of fever”. Gentian's use in traditional European medicine was well established, being recommended by Hieronymus Bock and Fr. Sebastian Kneipp.

Although the use of Bitters medicinally had been widely used and acknowledged by physicians for centuries, the Pure Food and Drug Act of 1906 arbitrarily banned all commercial claims of the health benefits of bitter. Granted, some advertisements went too far, such as claiming to "strengthen, invigorate, tone and rebuild the entire system" (according to Bitters, A Spirited History of a Classic Cure All, by Brad Thomas Parsons). I'm not sure which company made that claim, but an ad for Brown's Iron Bitters is a good example: