Calamus, the Mysterious, Medicinal Bitter — The Grow Network Community
If you are raising heritage poultry, The Livestock Conservancy is doing a census and requests your help.
Click Here to enter the census! 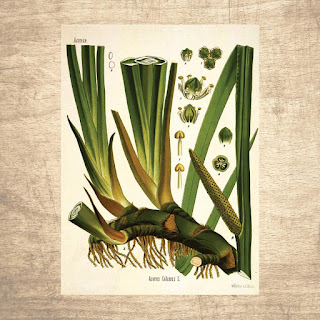 No discussion of Bitters would be complete without Calamus.  Calamus, or Sweet Flag, is not only one of man's most ancient medicines but it has unique qualities that make it particularly remarkable. Acorus Calamus is an herbaceous plant that grows commonly near water. This is one you can wildcraft if it grows in your area, but make sure the water is clean. A better plan would be to install a small ornamental pond in your herb garden... or an herb spiral with a pool at the base, and grow your own Calamus. The use of Calamus dates, at least back to ancient Egypt. It is mentioned in the Chester Beatty Papyrus VI, dating to approximately 1600 BC (according to Wiki). 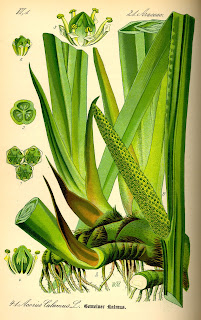 Illustration from an 1885 flora by Walther Otto Müller

The use of Calamus, Acorus calamus, in the domestic medication of India, is recorded from the very earliest times. It is sold commonly in the bazaars, and Ainslie (7) in his Materia Medica of Hindoostan, 1813, states that in consequence of its great value in the bowel complaints of children, a severe penalty was placed on the refusal of any druggist to open his door in the night to sell calamus, when demanded. The antiquity of its use is shown from the fact that it was one of the constituents of the ointment Moses was commanded to make for use in the Tabernacle, (Ex. xxx), while the prophet Ezekiel says of the commerce of Tyre, "Bright iron, cassia, and calamus were in thy market." Theophrastus (633) mentions calamus, and Celsus (136), nearly two thousand years ago, refers to it as a drug from India. In the sixteenth century Amatus Lusitanus (16a) reports it as imported into Venice, and in 1692 Rheede (547) figures it as an Indian plant under the name Vacha, the same name being still applied to it on the Malabar Coast. From its tropical home calamus has spread until it is now found in all temperate climates suitable for its growth, the market supply coming mainly from Southern Russia, through Germany. The therapeutic use of calamus in pharmacy and licensed medicine is, as with other like substances, a gift of empiricism founded in the far distant past.  https://www.henriettes-herb.com/eclectic/lloyd-hist/acorus.html\

Amy Stewart writes in her book, The Drunken Botanist:

The rhizome has a complex, spicy, bitter flavor that lends itself to amoros like Campari and herbal liqueurs like Chartreuse, as well as gin and vermouth. The flavor has been described as woodsy, leathery, and also creamy... but.. Some verities of the plant contain a potentially carcinogenic compound called Alpha-asarone. For this reason, the FDA has banned it as a food additive. However, not all sweet flag is equally dangerous. The American variety, called A. calamus var. americanus or A. americanus, does not have any significant quantity of the potential toxin and European strains also have relatively low levels. The European Union acknowledges the plant is widely used in bitters, vermouths and liquers ...

According to DIY Bitters, by Guido Mase and Jovial King:

This cosmopolitan reed.. had two major varietals; one grows in India (and naturalizes into Asia and Europe) and the other is native to North America. The North American species is deemed safer. Both have a long history of use and are favored for their unique, spicy pungency. In the Old World, Calamus was used in incense blends from Egypt to Solomon's Temple; in the New World, pieces of the rhizome were chewed to relieve fatigue and lighten the spirit.

The National Center for Biotechnology Information states:  Acorus calamus (Sweet flag) has a long history of use and has numerous traditional and ethnomedicinal applications. Since ancient times, it has been used in various systems of medicines such as Ayurveda, Unani, Siddha, Chinese medicine, etc. for the treatment of various aliments like nervous disorders, appetite loss, bronchitis, chest pain, colic, cramps, diarrhea, digestive disorders, flatulence, gas, indigestion, rheumatism, sedative, cough, fever, bronchitis, inflammation, depression, tumors, hemorrhoids, skin diseases, numbness, general debility and vascular disorders. Various therapeutic potentials of this plant have been attributed to its rhizome. A number of active constituents from leaves, rhizomes and essential oils of A. calamus have been isolated and characterized. Of the constituents, alpha and beta-asarone are the predominant bioactive components. Various pharmacological activities of A. calamus rhizome such as sedative, CNS depressant, anticonvulsant, antispasmodic, cardiovascular, hypolipidemic, immunosuppressive, anti-inflammatory, cryoprotective, antioxidant, antidiarrheal, antimicrobial, anticancer and antidiabetic has been reported. Genotoxicity and mutagenecity of beta and alpha-asarone is reported, which limits their use at high dosage. Though A. calamus has been used since ancient times, many of its uses are yet to be scientifically validated. In the present review an attempt has been made to explore traditional uses and pharmacological properties of A. calamus.     https://pubmed.ncbi.nlm.nih.gov/24200497/

But, wait... there's more! Calamus also has a long history of use as a psychoactive substance. If you dig around the murky corners of the web... or a physical library for that matter, probably half the information you will find on Calamus is its purported drug or "magical" effects. According to "The Vaults of Erowid"..

SWEET FLAG (Acorus calamus), also called sweet calomel, grows in damp places in the north and south temperate regions. A member of the arum family, Araceae, it is one of two species of Acorus. There is some indirect evidence that Indians of northern Canada, who employ the plant as a medicine and a stimulant, may chew the rootstock as an hallucinogen. In excessive doses, it is known to induce strong visual hallucinations. The intoxicating properties may be due to a-asorone and ß-asarone, but the chemistry and pharmacology of the plant are still poorly understood.  https://www.erowid.org/library/books_online/golden_guide/g71-80.shtml#SWEETFLAG

The author who wrote about Calamus for "Erowid", had a rather hellish experience in using it as a hallucinogen, but eventually found a way to use it more subtly.

On the other side of the coin is Maria Treben. Her recommendations for Calamus used medicinally are nearly miraculous! From Health Through God's Pharmacy: 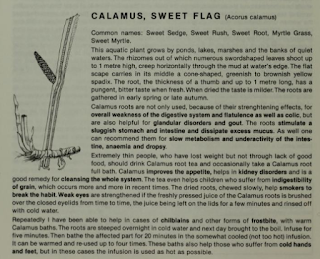 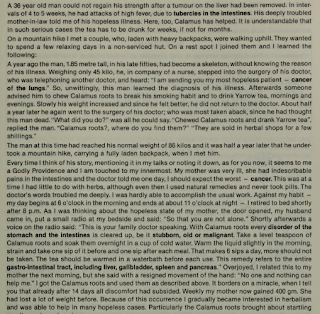