Best Of — The Grow Network Community
Patience is bitter, but its fruit is sweet.

So you might remember my post a while back about my little gardening friend - Hazel - from down the street.

Well, yesterday I was sitting out on my porch scraping leaves off my dried thyme for the spice cabinet and Hazel's buddy - Duke - came running over. ( Duke just got a bearded dragon a week or so ago.)

He says, "Do ya have any leafy greens?"

"Does Blaze eat kale?" I ask

"Well go check and if so we can go cut some."

"Did you ask your mom to make sure?"

"Google. He knows everything!"

Duke and I went and cut some Dino kale and his bearded dragon had a full belly.

These kids crack me up...do I have an leafy greens!

I have been a vegetarian for over 30 years and the reason is because I do not like the taste of meat. So besides the new meat being mostly chemicals, it also tastes like meat!

I just purchased Darra Goldstein’s Beyond the North Wind: Russia in Recipes and Lore. I can tell this is going to be an amazing culinary journey, loaded with history. I’m guessing that if you live in a cold climate and are growing your own food that this will have loads of hints as to what to preserve, etc. A few recipes I’m looking at right now are Dandelion Blossom Syrup, Farmer’s Cheese, Sea Buckthorn Tonic, and a médicinal Hot Spiced Honey that people used to add goodies like St. John’s Wort and for tips to. If you enjoy cookbooks you might love this one! 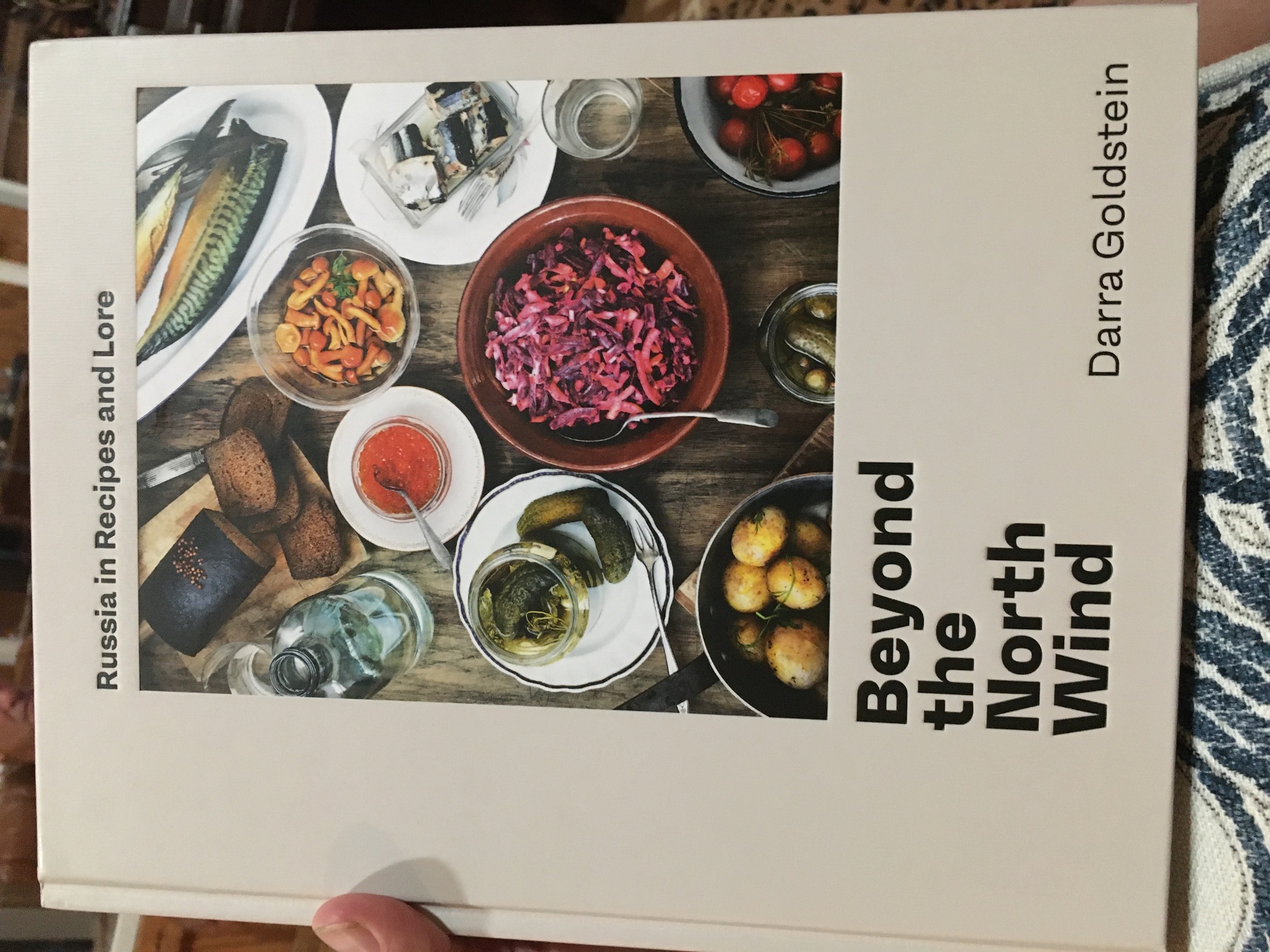 Some of you may know my one goat (a buck) has recently developed an attitude I am pleased to say one day of being spritzed with cider vinegar has really seemed to help. If I say NO loudly, he keeps his distance. But I admit until, I know he has really changed I don't turn my back on him.

While having his attitude issue he literally destroyed his pen. I have not had time to fix it and since he has stayed in a 30 foot area, and happily munching on poison ivy, I have let him run loose. Yes, this may be a mistake and I plan to get fence repaired tomorrow afternoon.

This evening I was finishing off all the animals,. making sure they had water and giving them their evening snack. I had one goat food bag that was just about empty so I just took the bag with me. My hands were full and I was still keeping a good eye on Mr. Attitude so I dropped the bag on the ground.

As I was feeding everyone else, Mr. Attitude had to check out the bag. To make sure he had any crumbs he tipped the bag up and it went totally over his head and down to his shoulders. He shook his head and could not get it off. As a matter of fact, it was on more secure. So he started running around the back yard.

Yes, I was laughing. And yes, I just let him run. He finally realized he could not see and came to a complete standstill. I went over and cautiously took the bag off.

What a look he had on his face!

So what have your animals done that made you laugh?

There has definitely been a push for a few years to frame meat as “dirty” and plant-based as “clean”. I think this category will grow massively in the years to come, but it makes me sad. Instead of pushing for ultra processed vegan options, we need to pay attention to how our food is grown/raised and eat real food to be healthy. I know that for years I was easily manipulated by marketing and health trends, and it was a huge relief when I finally made the connection that, among other things, health comes when you grow your food and cook it yourself, not from artificially manipulating it to look and taste like something it isn’t. Yuck!

I’m not arguing for any particular diet, just saying we should let our meat be meat and our vegetables be vegetables!

In Response to @Monek Marie post about the funny goat... well since this isn't a goat story I thought I would stat a new thread.

I grew up in North Miami, FL so it shouldn't be strange that as kids we found a small spider monkey in our yard one day. We befriended him and he became a family pet. Or pest, depending on if you were a kid or one of the adults. We named him Sambo.

Anyway, my mom and dad ran a small studio on the main street (on 125th Street for those of you who know the Miami area) where my mom did photography and my dad did is artwork. Sambo loved being with people so he often went to the studio with my parents while we were at school.

My mom had a morning ritual of going to the hamburger joint down the street to get coffee. It came in a white bag and had all those little packets of sugar in the bottom of the bag. Sambo loved to dive into that bag grab a packet of sugar, swoop up to one of his perches, rip open the packet, turn up his head, and pour the sugar down his throat.

And then of course there was the literal monkey running around the studio for a while until the monkey had a sugar crash. My mom said she tried to prevent this, but the money was so fast and agile he often outwitted her. And quite frankly it was so funny to see this monkey rip open the packet and do the pouring sugar thing. that she resigned herself to it and always got an extra packet.

One day us kids were at the studio late and my mom decided we could all have hamburgers for dinner. My mom was pretty old school and normally every thing was cooked from whole foods so this was a big treat. We didn't have a lot of money and then, as is is now, it is more cost effective to buy and cook whole foods than it is to buy processed stuff. So the hamburgers were really rare. Actually that's the only time I remember us getting to eat hamburgers which might be why I remember this so clearly.

So we were all at the studio and when the white bags full of hamburgers arrived everyone was shocked to see Sambo dive bomb down into a bag and grab a little white packet. He went to one of his high places out of reach and ripped open the packet. We stared at him in horror because we knew his error. But he didn't know and eagerly tilted back his head and poured the white crystals in.

My mom laughed and laughed as Sambo circled the studio pawing at his mouth and complaining! She thought it was a just reward.

Yeah, I know not all of us remember the 80's, but the "New Wave" music was fantastic... Talking Heads, Men Without Hats, Men At Work, B52s, Dexie's Midnight Runners, Devo, Simple Minds, A-Ha, Duran Duran, Love and Rockets, Modern English... the phenomenal Pogues...... but, especially the Cars!!!.. listen to Waren Zevon or The Romantics in 2021, and they sound so much fresher and more interesting than anything new... and, a lot of one hit wonder bands were great etc. So, to the melody of an old Eurythmics song:

"Sweet dreams are made of cheese, who am I to dissa-brie, I traveled the earth and the seven seas, just to get myself some cheese."

Does anyone else watch this series? Its on the History Channel.

I've been watching it since the first season (its into season 8 this year), partly because the first two seasons were filmed on Vancouver Island. This season is particularly interesting for me cause it is being filmed in my area. Well, not quite. The location is 220 km west (about a 5 hour drive) in the heart of the Coast Mountain Range. They did a very good job of keeping this quiet cause no one seemed to know anything about it, until an article in the local paper just before it went to air. This coming Thursday (June 17) will be the third episode.

If anyone has any doubts about how many grizzlies they have seen so far, let me tell you, they have not filmed them all! This area is heavily populated with grizzlies! I think the woman who is building the pit house will have the best protection from them. The pit house is a modification of the pit houses that are traditional in this area. What a lot of digging! I think she will be warmer than everyone else, too.

The wild onions that one person found are fairly common in that area and will dry well for storage. It will be interesting to see how much and what types of wild food they will find.

The scenery is as stunning as they have made it out to be. No photo editing needed on this trip. Chilko Lake is 65 km long and oriented so that the winds really blow from one end to the other. It has a reputation for being a dangerous lake for boating. And yes, it is that beautiful, turquoise blue colour.

I am gearing up to do more crafting and using things off the property. This would be cute and with and probably easy to get the supplies by stepping in the back yard 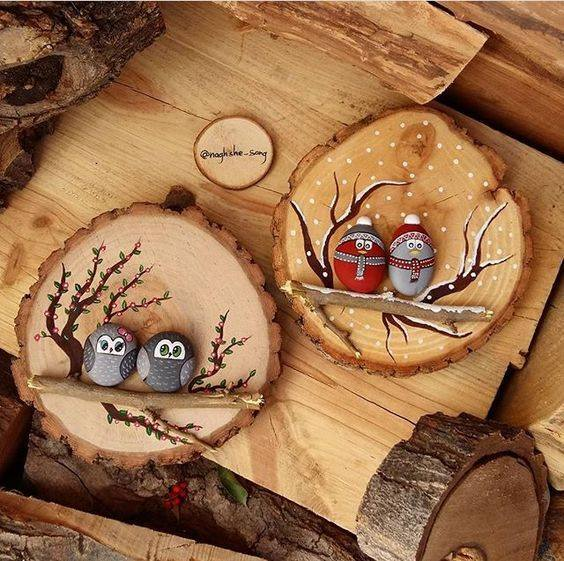 In my opinion, the problem with commercial plant-based meat products is that they are made from soy or peas that are generally grown in mechanized, factory farms that uses herbicides, pesticides and chemical fertilizers. This is also endangering the environment as large swaths of important habitat, including the Amazon rain forest, are being destroyed for soy plantations as the world's demand for plant-based products increase.

I have yet to see any plant based meat products in any of my local stores that are advertised as organic. I did see one ad online that said its sausage was made from organic tofu but I think organic plant-based meats are few and far between.

We need to be conscious of where all our food comes from and how it is grown/produced.